R34 Nissan GTR Highway Patrol Car Spotted In Japan! – Someone remind me to NEVER commit a crime in Japan!

“I nearly lost my shit as the unicorn of all Japanese highway patrol interceptors, the R34 GT-R, complete with a uniformed and helmeted police officer pulled along side me on the highway tonight and cruised past on the Kan-Etsu expressway.

I had read about them, people had speculated and we have all heard many stories of myth and legend about the existence of this machine but I can confirm they actually do exist and are STILL in service!

I dare you to run from this badboy – Han would have been screwed because this beast is tuned and runs more than 300kph!” 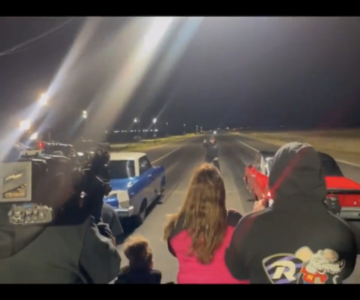 Crazy footage of Street Outlaws JJ Da Boss and Trish’s accident during the filming of “America’s List”. JJ and Trish were both treated for minor injuries.

JJ has some serious bad luck with his cars…👇

“During filming of Season 2 of Street Outlaws – America’s List, Trish and JJ Da Boss made contact with each other. Trish went on to hit a Production Van. Both drivers were taken to the hospital with non-life threatening injuries and will make a full recovery. Prayers for both teams.” This is what happens when you have more money than mechanical know-how! Lol douchebag Lamborghini owner gets served a big piece of humble pie after calling out an R32 Nissan GT-R. Once he realized his pockets were $4500 lighter he figured…BAR FIGHT!!!

“A heated argument between two racers ends in a race setup with a total pot of $9,000! Things don’t go quite as planned for one of the racer and it gets heated! You may have seen this XBox Forza Horizon R32 Nissan Skyline in videos on the net so you probably know it’s not to be messed with (800whp), but this Lambo driver with a temper didn’t know what was coming!

We haven’t seen too many fights when out filming, but when we do it’s typically over ego, money, or BOTH! This was a very exciting way to end our trip in Australia at the end of the roll race night at Queensland Raceway.

Luckily the only actual damage done was to one Lambo owners ego and his pocket book!”