@StreetOutlaws Busted By Cops During $15k Race! – No “get out of jail free cards” on this episode!

“BIRD BOYZ vs BLACK BIRD VEGA for $15,500 (80/20 split) in the final for the biggest cash days EVER… and it does not go as planned. In the semi-final Daddy Dave had a mechanical failure and oiled down the right two lanes of the road, with the clock ticking and the sun coming up at 5:00am, it was decided to race the opposite way on VIRGIN concrete and block traffic at the end… Getting busted street racing is definitely not something you want on your rap sheet, but unfortunately for this particular racer, he heads straight into a trap! Making a hit down a dark road in Texas, this race doesn’t end the way these two racers want…especially being the final race of the night battling for over $15,000! On Street Outlaws, the police force isn’t exactly….real. However, on this particular night, all bets are off as these racers roll their race cars out of their trailers in a true fashion street race, just like the days before the show! Cash Days is the name of the game, and with 31 badass cars lining up for a shot at a big pot of money, these guys hold back for nothing! The Procharged Vega and Nitrous BIG Block Probe both make a seriously fast pass when all of the sudden…police appear out of nowhere!” “We decided to take a blast into the past with our 2006 ‘CARNAGE FEST v1’ DVD for the first time ever on YouTube. This video includes 7 years wow moments from some of the best heads up racing on the planet.” 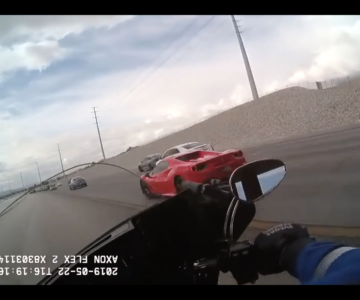 UFC President Dana White found himself in a little hot water after being caught speeding by Nevada State Police. White was driving a sick Ferrari 488 Spider when an officer observed him traveling well over the speed limit resulting in a traffic stop. Luckily for Dana the cop was pretty cool and issued a warning. Ahhhh the perks of being famous!

“The Ultimate Fighting Championship is the largest mixed martial arts organization in the world, and Dana Frederick White, Jr. has stood at its helm as president since 2001. Under White’s leadership, the UFC has grown from a once-ridiculed $2 million investment on the part of Station Casinos executives Frank and Lorenzo Fertitta, into a multibillion-dollar business and a household name. But a net worth in the hundreds of millions of dollars doesn’t make any difference when lights and siren come on behind you. Or does it. On May 22, 2019, UFC President Dana White was stopped for speeding by a Nevada Highway Patrol trooper on a motorcycle. As for White, he was driving a Ferrari 488 Spider. Twenty-three miles per hour over the limit. ”